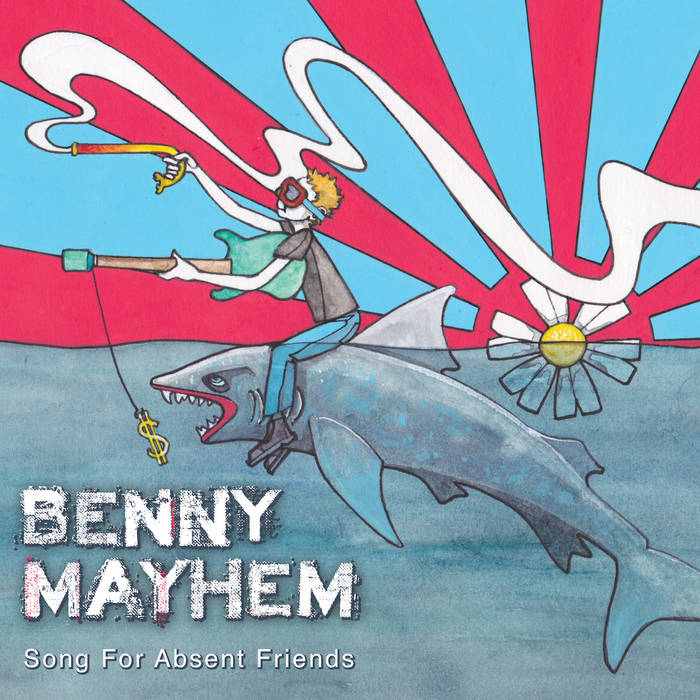 The first in the series of CD Singles from Benny's debut album (due 2020).

Benny Mayhem has covered a lot of ground, literally and figuratively. Written in a hotel room in the Austrian Alps, his latest single Song For Absent Friends is both a tribute to, and a product of, the songwriter's considerable world travels.

From being a guitar-strumming teenager in his bedroom at the turn of the millennium, to a decade as the shirtless-and-writhing frontman of rock monsters Project Mayhem, to performing 450+ shows in nine countries worldwide... the musical journey of Benny Mayhem has its own overfilled passport.

From a home base on the west coast of Australia, Benny Mayhem has toured the world in a way that few other artists have considered... as a wandering troubadour. And through this lifestyle choice, Benny has toured continental Europe twice and the UK thrice; working his way up from busking outside tube stations to the UK's festival circuit within two years.

But, more importantly, he has met people and seen places that have changed and forever enriched his life.

Both a hook-laden sing-along and a song from the heart, Song For Absent Friends is an ode to the people that have helped shape Benny's journey and, indeed, the person he is today. Equipping himself with a new live band, Song For Absent Friends finds Benny embellishing upon his trademark folk-punk sound with some Sunnyboys-style Australian power pop and a touch of Californian punk. And why not indeed...

Teaming up with West Australian multimedia creative Steve Correia, Benny's move to this full band sound came about when he settled into Perth's Citrus Studios to mix songs he had recorded at Somerset's Fuelled By Cider Studio while on his most recent three-month European tour. As the pair worked on the songs, two things became apparent: that these songs were itching for a full band, and that there were enough of them to already have an album well under way.

So that's where things are headed.

From here on, Benny has two touring formats: solo and full-band; both of which will visit Australia and Europe over 2016/17. And as he already prepares to get back on the road, Benny will be studio-bound, adding the finishing touches to his most interesting and personal album to date.

Nostalgic, yet ushering in a new era, Song For Absent Friends headlines this fresh chapter in the tale of Benny Mayhem while recapping the story that came before it. It is the perfect introduction of the shape of things to come.

I’m sitting in my room,
Thinking of times I shared with you,
And I wouldn’t be me today if it wasn’t for you.

Hangin’ out by myself
Wasn’t good for my health
So I took a plane far away.

It almost broke my head,
Awful things done and said,
But I just had to make my way.

I have struggled, I have fought,
I have worked and I have sought,
And I’m lookin’ down at a mountain of cash in my hand.
So it’s time that I sat down and finally said ‘thanks!’

Hangin’ out with the band,
We were the best in the land,
We blew everyone off the stage.

At the end of the Earth,
It’s a long way to Perth,
We were not just a pretty face.

We worked our arse off for ten years.
We shared the blood, the sweat and tears,
In a corrupt environment.

Stu Harvey worked for Shock Records, let’s not forget!
But I want to say thank you, dudes, we all did our best.

Now I’m sitting in my room,
Thinking of times I shared with you,
And I wouldn’t be me today if it wasn’t for you.

To all my friends in the UK:
You saved me when I was insane.
You’ll probably never know all you’ve done for me.

Cheers to my friends in Victoria,
The backstage mob in Cumbria,
And to my mates in Florida,
This one’s for you!

Hangin’ out on my bed,
All the things that we shared,
You were the one who believed in me.

If you hadn’t been there,
God knows I could be dead,
You’ll never know what that means to me.

We haven’t spoken for so long.
Was it you or I who done us wrong?
After all these years, I still think of you every day.
And I wish you all the best, and hope you’re OK.

Well, if that's what we get for focussing on The Monster
You'll excuse me while I put that Abbott out of my mind
It's not I don't care or I'm not petrified
Re: the country's Great Slide - our moral decline
But Barnett & Howard have proven that people are dumb

So, ga'arn, treat my country the way that she's never deserved
You can rape, you can pillage people and the natural world
In the face of Earth's doom, you can Wittenoom Broome
In the hope that you'll go to some afterlife soon
But you'll get the same hell wealthy Mayans would have faced as they fell…

Even if you succeed in replacing the forests with weeds
When the rivers are dead and your ego's been fed
Begging, poisoned, on your knees

When the Earth finally dies with no tears in her eyes
A hollowed-out hide - hey, but at least we tried!
Somewhere far off in space in a temperate place

Comets will rain from the sky…

And life will go on
Just as it always has before…
Oh, and the rains will come down
Just as they always have before…

I was just 21, I was far from my home
All I wanted to do was to be in The Zone
Seventeen years of institutions
Punishments lies and contradictions

‘Cause you’re told when you’re young that you can’t cross the line
But how else can you tell what is wrong and what’s right?
So I do not regret all the friends that I made
The ones I obeyed or the ones I betrayed

I fell in love on those hot summer nights
But it’s hard to be true when your mind’s on the white
Every gold coin has a queen on one side
Just like every cloud has a silver, white line

Their solutions are our problems
They put up the wall
On each side, time and prime us
Make sure we get fuck all

They play their games of power
They mark and cut the pack
They deal us to the bottom
But what do they put back?

Just take a look around you
At the bitterness and spite
Why can't we take over and try to get things right?

We're gonna blow up in their face!

Bandcamp Daily  your guide to the world of Bandcamp